Our Teen Advisory Board was busy decorating for the Christmas season! As well as setting up BPL's Giving Tree.

Bremen Public Library is giving back to those teens in need with our new Giving Tree. Teens in need of hats, gloves, and scrafs can come into the Young Adult Room during December select the items needed. Donations are accepted, but must be purchased new and be odor free.

We would like to thank the Notty Knitters for their partnership with this event. The tree will be located next to the Care Cabinet in the Young Adult Room. 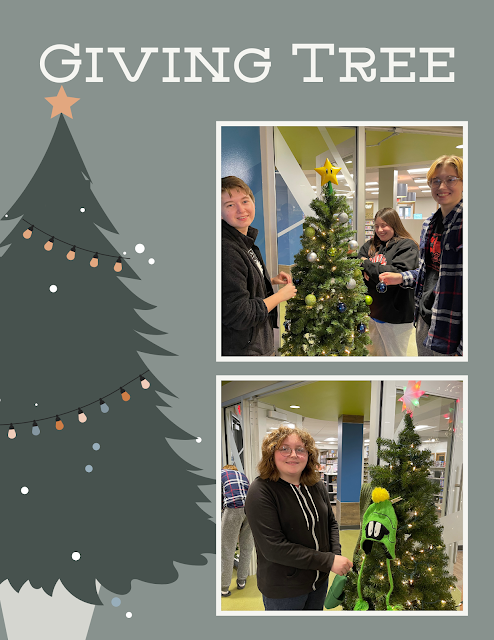 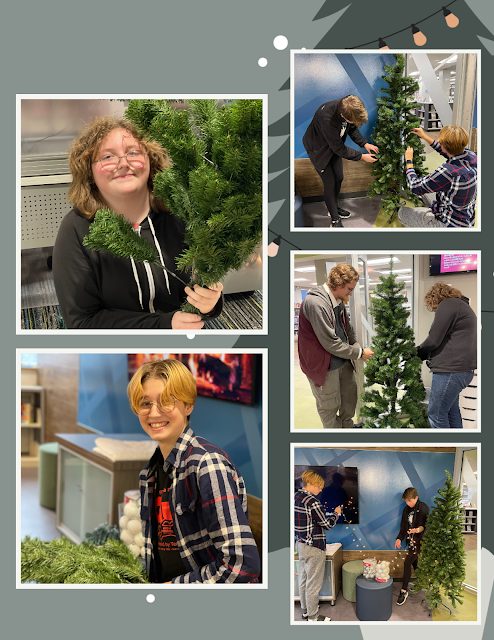 Posted by YA Librarian at 11:08 AM No comments:

Email ThisBlogThis!Share to TwitterShare to FacebookShare to Pinterest
Labels: Programs

Zombie Prom: A Night to Dismember

These teens had a FRIGHT of a time at our first Zombie Prom event! Thank you to all who participated, and a special thank you to H&R Block Bremen for donating waters! We will see you next year! 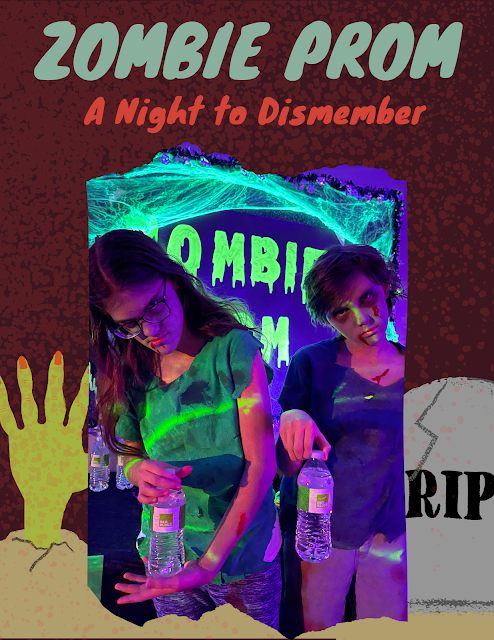 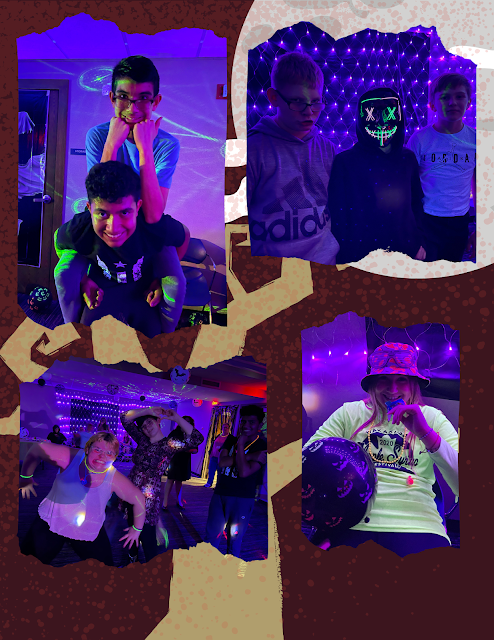 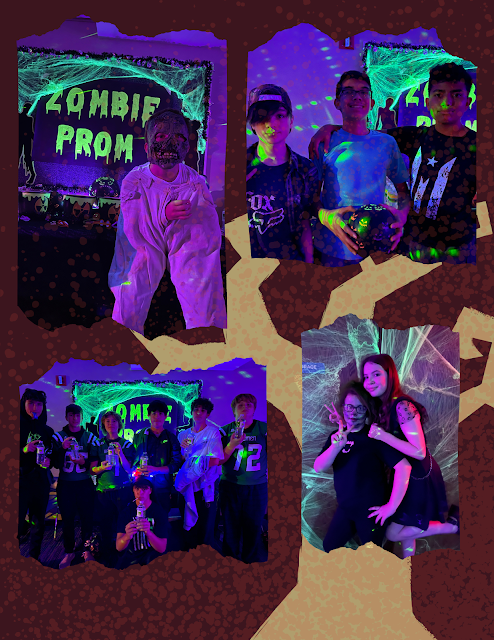 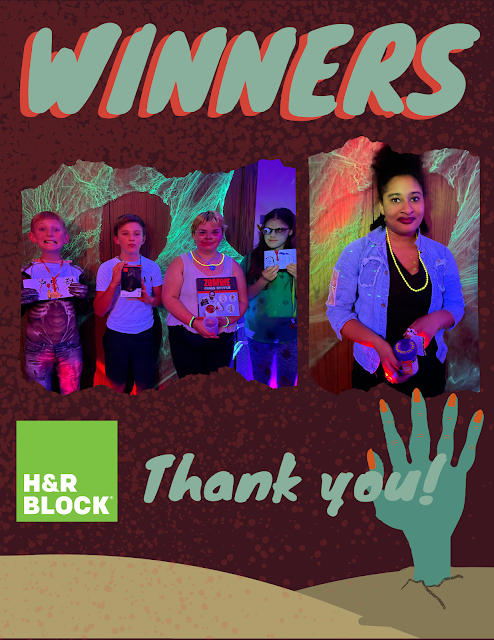 Posted by YA Librarian at 10:09 AM No comments: 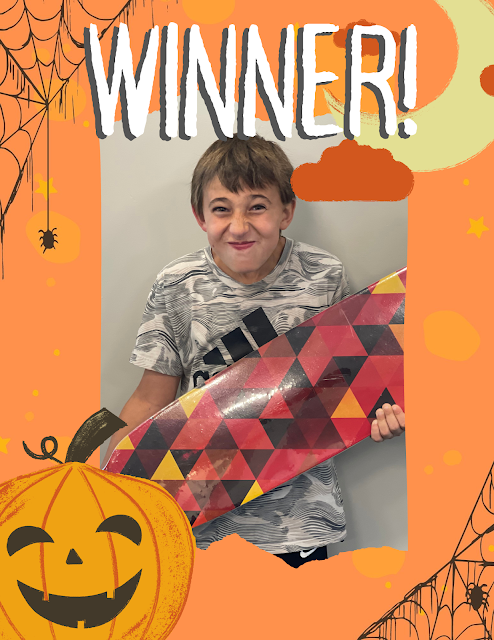 Posted by YA Librarian at 9:38 AM No comments:

That's a wrap! TeenTober: Freak Out at Your Library Has come to an end. With over 40 teens signed up for the reading challenge, and over 500 teens that attended programs! Thank you to all who participated! We can't wait for next year! 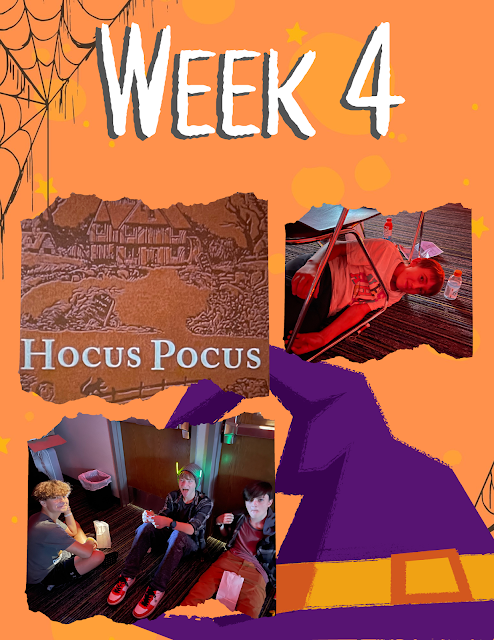 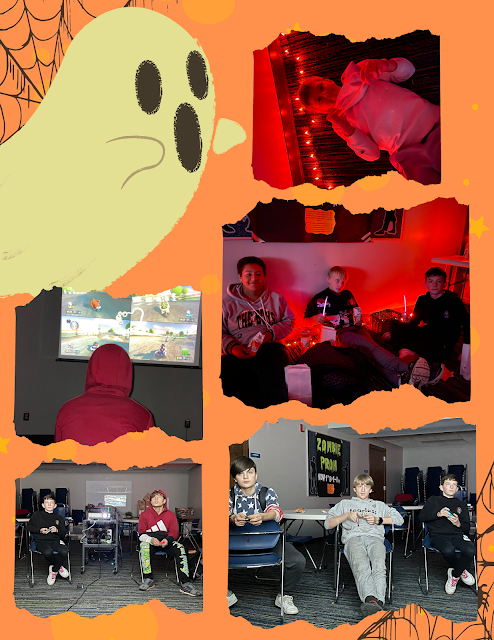 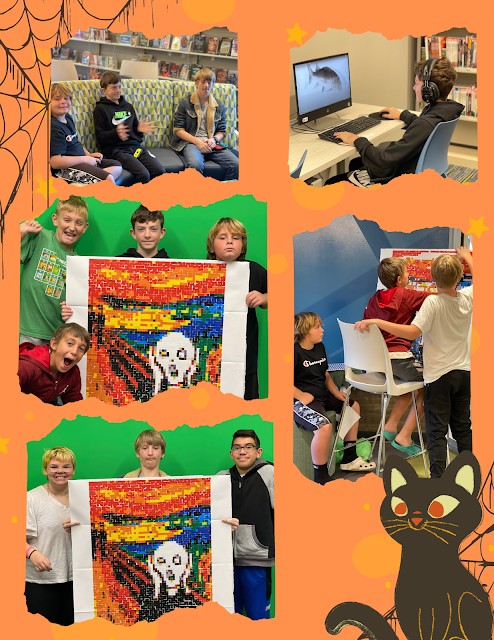 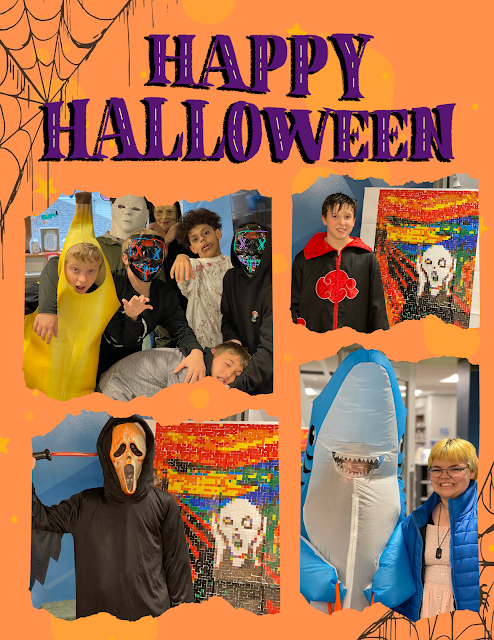 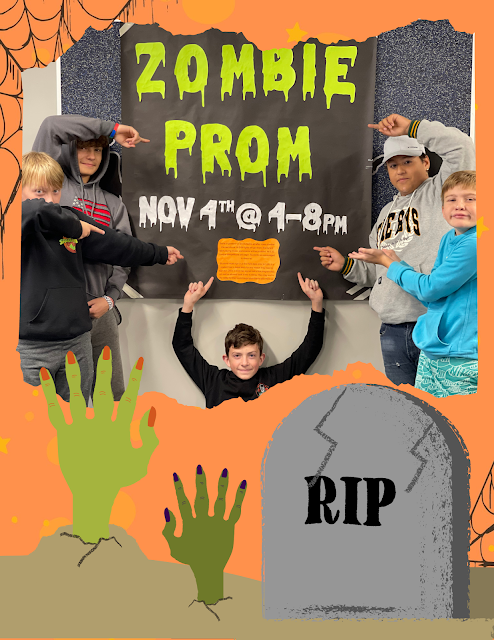 Posted by YA Librarian at 11:21 AM No comments: 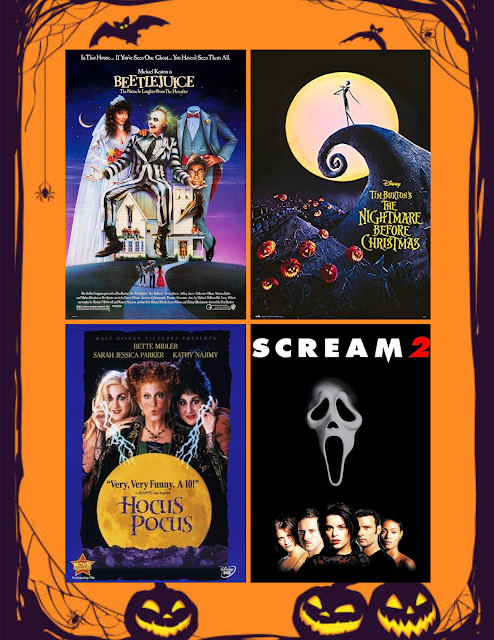 BEETLEJUICE
After Barbara and Adam Maitland die in a car accident, they find themselves stuck haunting their country residence, unable to leave the house. When the unbearable Deetzes and teen daughter Lydia buy the home, the Maitlands attempt to scare them away without success. Their efforts attract Beetlejuice, a rambunctious spirit whose "help" quickly becomes dangerous for the Maitlands and innocent Lydia.
My rating: 5/5 stars

This movie review was brought to you courtesy of an anonymous person in our YA community
THE NIGHTMARE BEFORE CHRISTMAS
The film follows the misadventures of Jack Skellington, Halloweentown's beloved pumpkin king, who has become bored with the same annual routine of frightening people in the "real world." When Jack accidentally stumbles on Christmastown, all bright colors and warm spirits, he gets a new lease on life -- he plots to bring Christmas under his control by kidnapping Santa Claus and taking over the role. But Jack soon discovers even the best-laid plans of mice and skeleton men can go seriously awry.
My rating: 5/5 stars

This movie review was brought to you courtesy of Molly Harman.
HOCUS POCUS
After moving to Salem, Mass., teenager Max Dennison explores an abandoned house with his sister Dani and their new friend, Allison. After dismissing a story Allison tells as superstitious, Max accidentally frees a coven of evil witches who used to live in the house. Now, with the help of a magical cat, the kids must steal the witches' book of spells to stop them from becoming immortal.
My rating: 5/5 stars

This movie review was brought to you courtesy of an anonymous person in our YA community.

SCREAM 2
Sydney and tabloid reporter Gale Weathers survived the events of the first "Scream," but their nightmare isn't over. When two college students are murdered at a sneak preview of "Stab," a movie based on the events from the first film, it's clear a copycat killer is on the loose. Sydney and Gail, as well as fellow survivors Deputy Dewey and Randy have to find out who is behind this new murder spree, before they all end up dead.
My rating: 3/5 stars

This movie review was brought to you by Raven Krugler.

Posted by YA Librarian at 11:55 AM No comments:

Email ThisBlogThis!Share to TwitterShare to FacebookShare to Pinterest
Labels: YA Movie Recommendations 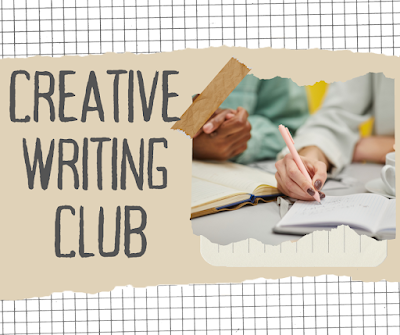 The Bremen Public Library is happy to announce that we are bringing back our Creative Writing Club this November (2022) in celebration of National Novel Writing Month (NaNoWriMo)! Students in grades 6-12 are invited to participate. FREE writing journals will be provided while supplies last. No registration is required.

Participants will meet in the downstairs programing room every Tuesday in November at 4:00-5:00 PM. Here are the dates...

National Novel Writing Month began in 1999 as a daunting but straightforward challenge: to write 50,000 words of a novel during the thirty days of November.

Now, each year on November 1, hundreds of thousands of people around the world begin to write, determined to end the month with 50,000 words of a brand-new novel. You may know this mass creative explosion by the name National Novel Writing Month, or NaNoWriMo—but that's not all that NaNoWriMo is!NaNoWriMo is a nonprofit organization that supports writing fluency and education. But it's also a social network for writers like LinkedIn is for job professionals, or DeviantArt is for artists, or Facebook is for moms whose kids accept their friend requests only to provide them with "limited profile" access. It tracks words for writers like Fitbit tracks steps for the ambulatory. It's a real-world event, during which 900+ volunteers in places like Mexico City, Seoul, and Milwaukee coordinate communal writing sessions in thousands of partnering libraries, coffee shops, and community centers like… well, like nothing else.It's internet-famous. It's a community-powered fandom (before there was the Beyhive, or Nerdfighters, there were Wrimos). It's a start-up incubator for novels (books like Water for Elephants, Fangirl, and WOOL began as rough drafts in November!). It's a teaching tool, it's a curriculum, and its programs run year-round.Whatever you thought NaNoWriMo was, it is more than that.

For more information about NaNoWriMo please click the image below.

Posted by YA Librarian at 1:51 PM No comments:

Email ThisBlogThis!Share to TwitterShare to FacebookShare to Pinterest
Labels: Programs

Oh my gourd! Did these teens have fun during week 3 of TeenTober! Teens made some spooky new friends during our Zombie Doll activity, and attended our weekly Anime Club. There is still plenty of time to register for TeenTober: Freak Out at Your Library. Teens in grades 6-12 can register at the front desk. 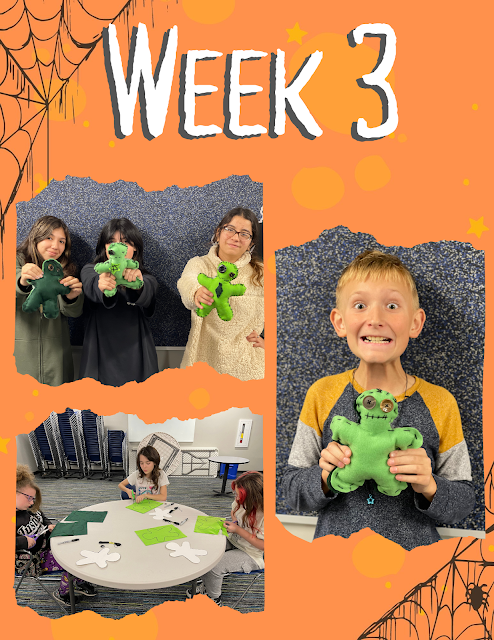 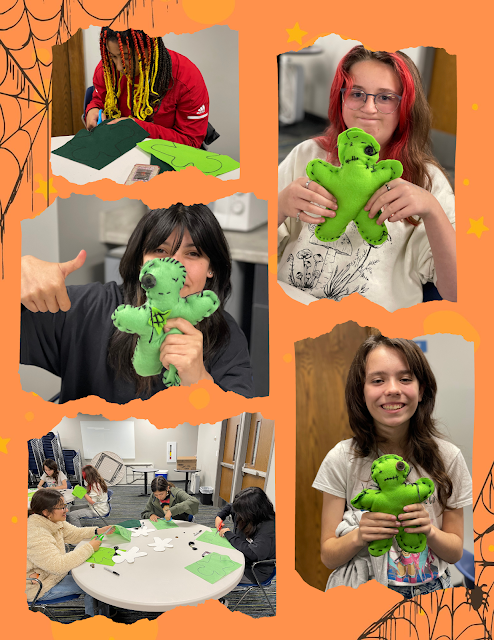 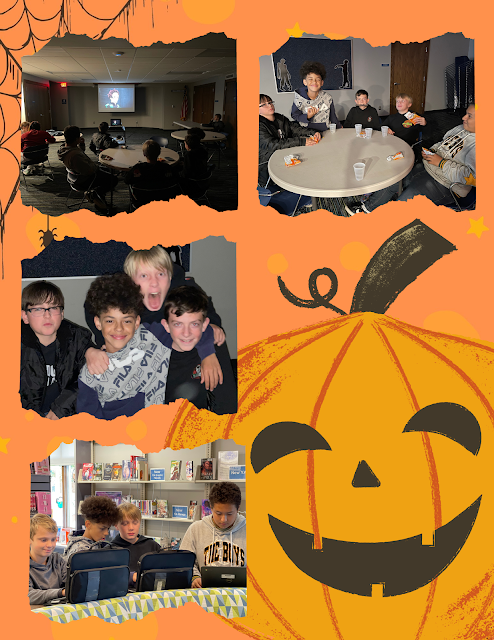 Posted by YA Librarian at 10:05 AM No comments:

Visit Our Other Blogs!